Today my guest is Karin Tanabe, who's doing a virtual blurb blitz tour for The Diplomat's Daughter, a historical fiction available now from Atria. The tour will run September 18 - September 29.

Author Karin Tanabe’s Japanese father was three years old when the firebombing of Tokyo and Yokohama occurred in May of 1945—his very first memory was seeing his city on fire and hearing the cries of babies on the shore, where they had been carried for safety. While many Americans associate World War II with a parent or grandparent who fought bravely in Europe, Karin’s understanding of the war started with her father being attacked by American bombs.

These memories, as well as those of a family friend whose own wife and family were interned in a war relocation center, and additional friends who were born in captivity, piqued Karin’s curiosity, and spurred her to write a love story born out of one of the most unlikely places: a mixed-race internment camp. THE DIPLOMAT’S DAUGHTER is a captivating and informed tale of three young people divided by the horrors of World War II and their journey back to one another. 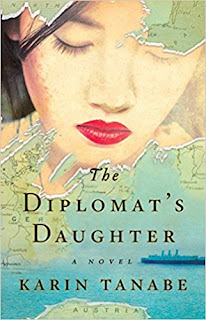 Work would help keep Christian’s mind off things. That’s what Franz Lange had said when he explained that he was working in the camp’s central utility building. A classmate named Kurt Schneider had told Christian he should volunteer for the milk prep job before he was given a
much more painful assignment than washing and filling milk bottles. In the camp, all the men and older boys  had their jobs assigned by Joseph O’Rourke, the camp commander. Kurt said that if he told O’Rourke that he was already a milk slinger, he’d let him remain a milk slinger.

“You caught up fast,” said Kurt as soon as Christian was next to him again. They spoke English, as Kurt’s German was so poor that he was only in the fourth-grade class in the German school despite being seventeen years old.

“So your Deutsch is good enough to put you in twelfth?” asked Kurt, taking long strides to keep up with Christian’s.

“Yeah, I grew up speaking German at home. I’m decent. My writing’s not, but I’ll survive.”

“Lucky you. You might have teachers who aren’t completely stupid. My teacher is a pig farmer. And the tenth-grade history teacher is an electrician. Only teaches the history of the lightbulb. Most of the German teachers didn’t even go to school. I heard the kindergarten teacher used to be in prison.” Kurt grinned at a passing group of girls and whistled. Christian stopped walking and Kurt shrugged. “You got to try with all of them, then maybe it will work with one of them. I don’t look like you, Hollywood. All tall and blond. I need a different approach.”

“Working the odds,” said Christian, moving again. “I respect that.”

“Anything to keep your mind occupied in this place. You don’t want to get fence sickness. You’ll be in the hospital for something while you’re here. Everyone is. Just don’t make it for fence sickness.” He stopped in front of the mess hall and looked down the road to where a group of mothers was standing. “Was that your mother you were talking to before?” he asked. “She’s a—”

“Don’t elaborate or I’ll have to knock your teeth out,” said Christian. He had no desire to knock anyone’s teeth out; he just felt it was obligatory to say it, especially given his mother’s current state. The thought of a fight made him think of Jack Walter the shoe thrower and he wished he were still in his room at the Home instead of fenced in in Texas.

“Come on, Tarzan,” said Kurt. “I’ll introduce you to Herr Beringer, who can put that aggression to work moving dairy products.”

Karin Tanabe is the author of The Gilded Years, The Price of Inheritance, and The List. A former Politico reporter, her writing has also appeared in the Miami Herald, Chicago Tribune, Newsday, and The Washington Post. She has made frequent appearances as a celebrity and politics expert on Entertainment Tonight, CNN, and The CBS Early Show. A graduate of Vassar College, Karin lives in Washington, DC. To learn more visit KarinTanabe.com and @KarinTanabe.
Buy links:
https://www.amazon.com/Diplomats-Daughter-Novel-Karin-Tanabe/dp/1501110470