For most people, quite an unepected final today. It was believed Federer would play against Nadal, but our countryman Goffin decided otherwise. 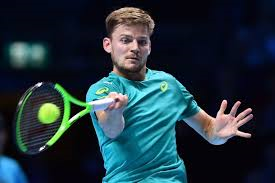 He started the big money tournament with a win against Rafael Nadal, then lost against Dimitrov, but won once more against Thiem and yesterday, in an epic match, he beat Federer!

Today he'll play once more against Dimitrov - and the result is yet to be awaited. David will want a revanche for his lost match earlier this week. And he'll be on a high after beating Federer. That one was his big idol and he could never win against him - up to now.

Goffin has the potential to become a top-5 player, even to win some Grand Slams. He's only 26, so he can tennis for a while longer. And what he doesn't have in lenght he compensates by being quick on his legs and having a great forehand.
Posted by Nickie Fleming at 12:13 AM