The tour will run February 13, 2018 to May 24, 2018. During this tour, you can enter your comments and stand a chance of winning. The prize for the tour is as follows: One randomly chosen winner via rafflecopter will win a $50 Amazon/BN.com gift card.
Link to place your comment: http://www.rafflecopter.com/rafl/display/28e4345f2585

11:18 p.m. Subject is checking into the Desert Palms Motel, accompanied by an unknown female.

Snapshot in the parking lot. Man and woman embrace. Betrayal, I see it every day, like my own reflection in the mirror staring back at me. Another case, another bottle of booze, life is no longer a mystery to me …

… Because I’m the private eye, hot on your trail; the top gun for hire. You’ll find me lurking in the shadows, always searching for a clue. I’m the bulletproof detective. I got my eye on you …

I’m digging you a desert grave, underneath the burning sun. You won’t be found by anyone. Vultures circle in the sky, and you, my dear, are the reason why.

… I was always easily influenced. 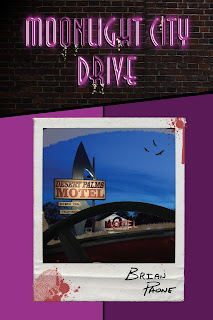 Smith twisted the key as hard as he could and heard a popping noise as the locking mechanism finally gave way. He pushed open his office door and entered the dark room. He tossed his keys onto his desk; they slid a short distance before a stack of time-faded papers and case-file folders abruptly stopped them.

Flicking the light switch, the room illuminated with an anemic-brown glow from the single dusty bulb. He took a step toward the coffee percolator on the windowsill, and his toe caught the corner of a tied-up pile of newspapers dating back at least ten years.

Smith exhaled loudly with a frustrated grunt and kneeled beside the newspaper bundle; the air escaping from his lungs carried the stench of day-old consumed alcohol, topped off with more last night that led to closing time this morning. He really hadn’t slept. He napped for a couple hours, then came here. He removed the Swiss Army knife from his pants and cut the twine, freeing the newspapers, watching as they avalanched to the floor.

He used his palm to shuffle and smear the newspapers around his office floor. His gaze quickly scanned his name plastered on all the headlines, praising the ex-deputy-now-turned-private-eye for all the scum he had gotten off the street, as well as locating abducted kids, reuniting long-lost biological parents of orphans, and exposing spouses who may have forgotten their vows. Smith had seen more than he cared to remember while he had been a sheriff’s deputy and could now safely check the box marked Seen It All since becoming a private eye.


Brian Paone was born and raised in the Salem, Massachusetts area. Brian has, thus far, published four novels: a memoir about being friends with a drug-addicted rock star, Dreams are Unfinished Thoughts; a macabre cerebral-horror novel, Welcome to Parkview; a time-travel romance novel, Yours Truly, 2095, (which was nominated for a Hugo Award, though it did not make the finalists); and a supernatural, crime-noir detective novel, Moonlight City Drive. Along with his four novels, Brian has published three short stories: “Outside of Heaven,” which is featured in the anthology, A Matter of Words; “The Whaler’s Dues,” which is featured in the anthology, A Journey of Words; and “Anesthetize (or A Dream Played in Reverse on Piano Keys),” which is featured in the anthology, A Haunting of Words. Brian is also a vocalist and has released seven albums with his four bands: Yellow #1, Drop Kick Jesus, The Grave Machine, and Transpose. He is married to a US Naval Officer, and they have four children. Brian is also a police officer and has been working in law enforcement since 2002. He is a self-proclaimed roller coaster junkie, a New England Patriots fanatic, and his favorite color is burnt orange. For more information on all his books and music, visit www.BrianPaone.com 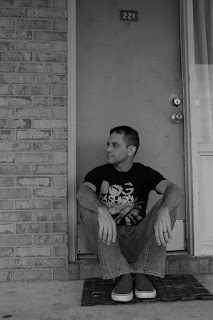 
As a personal touch, I asked Brian where he gets his ideas for his books. This is his answer:


As a rock-fiction author, the majority of my ideas come from song lyrics or album’s concepts. Two of my four novels (my time-travel romance novel, Yours Truly, 2095 is an adaptation of Electric Light Orchestra’s album Time, and my supernatural crime-noir novel, Moonlight City Drive, is an adaptation of Dog Fashion Disco’s Adultery album) are rock-fiction novels, and all four of four published short stories are rock-fiction based, covering Moby, Jethro Tull, Porcupine Tree, and Tom Petty & The Heartbreakers. So while I might be driving around in my car or listening to music in my office, a song or album might come on and I’ll think, “That would make a great storyline for a short or a full novel.” Then, as soon as that thought crosses through my head, characters and plotlines and story arcs just start emerging and usually I can’t help the floodgates after they’ve opened.