Having recently visited Spain and enjoyed it a lot, it's with pleasure I present to you John Meyer. John is doing a virtual book tour for Shadows, Shells and Spain, a travel memoir available November 17th from Summer Nomad Publications. The tour will run November 20th-December 1st.

John Meyer will be awarding a $25 Amazon or Barnes and Noble GC to a randomly drawn winner via rafflecopter during the tour. Please use the following link:
http://www.rafflecopter.com/rafl/display/28e4345f2488

I asked John what draws him to Spain in particular? This is his answer:

Because I write what I call fictional travel memoirs, I need locations that are rich in history, filled with local, colorful characters, and steeped in adventure. And now in two of my books, I’ve been drawn to Spain for all those reasons and more.
The first time was in my book, Bulls, Bands, and London, where I ran with the bulls during Pamplona’s San Fermin Festival. London was the primary focus of the story but Pamplona was where the main character was truly challenged and had to make a life-altering decision—while risking his life being pursued by a half-dozen frightened bulls.
My current book, Shadows, Shells, and Spain, was first conceived while I was visiting the town of Estella during the research stage of Bulls, Bands, and London. Exploring the town, I saw many hikers marching through Estella with their gigantic backpacks and their walking sticks. What was going on? Who were these people?
I dropped in a local albergue where many of these walkers were staying and discovered a diverse group of people from all over the world, who were determined to walk 800 kilometers across the country along an ancient Roman trading route to visit Santiago de Compostela. Each walker had their own personal reason for their demanding journey. Some had just quit their jobs. Some had just quit their marriages. Some just needed to unplug from their stressful lives back home. Whatever their reason they were all united in their belief that walking across the country would help them heal from their hurts or stimulate their minds to live their lives better when they returned.
So in the June of 2014, I joined this pilgrim party and walked the Spanish Camino from Pamplona to Santiago. The adventure had everything I needed to write my next book. I had the rich history of the Camino; I uncovered interesting anecdotes in every town; and I met wonderful characters from around the world. All I needed to do was add my story: Lost and listless on the island of Mallorca, Jamie Draper searches for his estranged wife, Pam, who has left him without any explanation or warning. Exploring her last known location, Jamie stumbles upon an urgent letter from his missing wife promising full disclosure as to her sudden departure and her current whereabouts. There’s just one catch: her mysterious adventure is disclosed in a series of letters she’s left hidden along the ancient Camino trail across northern Spain...
To outside pilgrims scattered across the globe, this Camino was perhaps a once-in-a-lifetime opportunity for some serious soul-searching. To Spanish pilgrims, this 800 kilometer trek was almost a rite of passage: a journey every Spaniard must make in order to test the body, free the mind, nurture the soul—and truly understand what it means to be Spanish.
That's what draws me to Spain. It doesn't matter where you live, what you do for a living, or how much money you make, every citizen embraces their heritage and takes a moment to re-connect with the land and dig deep inside their hearts to re-focus their minds to what's truly important in their lives.

More info on the book:

John Meyer's "Shadows, Shells, and Spain" is a thrilling new adventure where a husband desperately searches for his missing wife along the ancient Camino trail across northern Spain. It’s also a bold, new take on a modern-day pilgrimage that feeds the mind and soul of every character while testing the limits of their bodies... and their comfort zones. 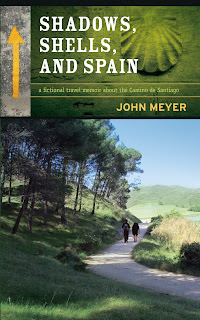 It became a miserable daily existence, made worse by a George Bernard Shaw quote that singly gnawed at me: “Those who can, do. Those who can’t, teach.”

George was right. I had to do . . . something. Anything! Teaching teenagers wasn’t fulfilling me; I needed to find a more creative outlet—and I thought I had found it when I started writing novels.

I tried several genres. My young adult novels only reminded me of my apathetic students, and my science fiction books always morphed into Star Wars. My dystopian novels were too depressing. My horror novels gave me nightmares. My political thrillers gave me headaches. I settled on detective novels starring rugged private eyes and leggy dames.

I wasn’t very good at it.

In fact, I never came close to completing any of them. I wasn’t clever enough to conceal the credible clues. My attempts at misdirection were too misleading. I was heavy-handed when I
needed to be charming, and I was lightweight when I needed to be conclusive. And anyone who read any of my early chapters always deduced the killer right away.

I even gave my early chapters to my brightest students as an extra-credit homework assignment.

“Never mind that. What did you think?”

“What is this, a murder mystery? Am I supposed to guess who the killer is? What does this have to do with my history project?”

“Never mind that. What did you think?”

John Meyer writes fictional travel memoirs—unique adventure stories that combine fun facts of history with present-day drama and humor—always revolving around a fictitious love story and always based on his own thrilling journeys. His previous publication, Bullets, Butterflies, and Italy, was selected as a November Best Book by Chatelaine magazine. Meyer is also the studio writer for Entertainment Tonight Canada and has been ever since the popular daily show launched back in 2005. 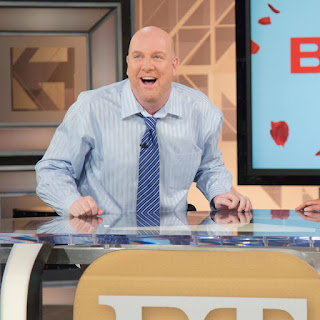 Barnes and Noble: https://www.barnesandnoble.com/w/shadows-shells-and-spain-john-meyer/1126997445
Posted by Nickie Fleming at 11:13 PM