Yesterday evening, the last Thursday of August, the giants danced once more through the streets of Dendermonde.

Dendermonde is a medieval town (got its town charter in the 12th century) which used to be surrounded by walls and a moat. Not much of it remains, though. Throughout time the walls crumbled and only two of the city gates are left to witness. Most of the medieval buildings are fake too, as the town was completely burned down during World War One.

However, traditions remain well alive. To understand their meaning, you have to go back to the Middle Ages, when a town had guilds (carpenters, butchers, weaver, dyers, shiploaders, etc.). These were well respected free citizens who got rights. One of these was they could have a yearly procession in honor of their patron saint. In the course of time, the various processions melted together to only two: that of Horse Bayard and that of the Giants. Both are UNESCO World Heritage. 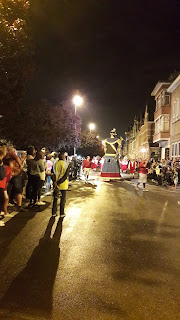 Bayard only leaves his stable every ten year (next time coming up on May 24th 2020) but the Giants dance every year. They are constructions made a very long time ago. The heads (in wood) even date back to the 15th-16th century. The frames, of course, need to be remade from time to time. Indian is 4,45 m high and weighs 71 kg, Mars is 3,70 m and weighs 79 kg, while Goliath is 4 m high and weighs 76 kg. Each giant is carried by ONE man only, who puts the frame onto his shoulders. You need special skills to be able to carry such a giant, walk with it through the (sometimes narrow) streets and even dance with that weight on your shoulders.... The people who carry these giants are descendants of the former shiploaders guild, they were used to carry heavy burdens. 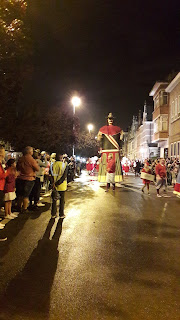 Of course, the giants are not the only participants in the event. A lot of other groups take part. You see carts on which tableaux of old times are depicted. A lot of fun (and for some, some fright) are the Knaptanden. These are guys who wear a costume and a head with sharp teeth. They refer to the find of an odd kind of fish in the river Schelde. They can clap their teeth and like to 'scare' people. 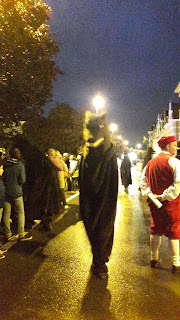 If you ever happen to take a trip to Europe and visit Flanders, be sure to come and see our giants in August. Even if you are not from town, you'll be taken in with the atmosphere!
Posted by Nickie Fleming at 2:31 AM