Yesterday, we watched the last - and very surprising - episode of Tabula Rasa:  a Flemisch tv-series with Veerle Baetens in the leading role and of course a lot of other prime actors. 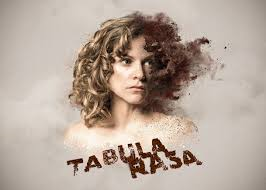 'Tabula Rasa' is about Mie D'Haeze, a married woman who suffers from amnesia since her car accident. Mie (short for Annemarie) can't remember anything - not even what happened just ago. And then someone goes missing and she's the only witness. The police place her in a mental institution in the hope the doctors there can make Mie better so she remembers where Thomas is.

Inside the institution, Mie gets visits from her mother and husband and she gets friendly with another patient, Vronsky. She also gets visits from the police and her psychiater, Dr. Mommaerts. She keeps a scrapbook in which she draws pictures of her dreams. Sometimes she gets mysterieus letters, warning her not to believe everything she sees or hears...

Bit by bit the viewer get more insight in what really happened. For instance, we learn that Mie's little girls - who plays around in the first episodes - in reality died in the car accident. And that she meets the man who is deemed responsible for that accident.

It was a rather special series, but both my sister and I loved it. And we never saw the end coming!
Posted by Nickie Fleming at 2:37 AM