The shame of Brussels

Yesterday, it was decided that Brussels won't get any EC 2018 matches. A real shame. They just don't get the Eurostadium ready in time - well, the building hasn't even started. 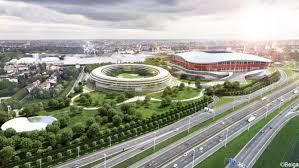 This is a great problem in our country. I.m.o. it's because of all the different governments we have. Indeed, for such a small country we have various government: the federal, the regional ones (Flanders, Brussels and Wallony). And then you must know that we have a high debt...  Wouldn't it be easier if we just had ONE government, like in the old days? It would save a lot of money, that could be used to build more schools, improve the police force, get more public building done.

But no, they rather fight over who has the right to do something.

The Eurostadium isn't the only building project gone wrong. There is equally a big problem with Brussels Airport, where the Brussels regional government hands out fines for planes flying over their territory. Also in my home town of Dendermonde we have two projects that just aren't going to be. Ten years ago, it was decided the railway station and its environment needed a make-over. But protest from locals has prevented this. Up to now nothing has been done. The same with the new prison. The existing one has become too old, too small for the number of prisoners incarcerated there. So they wanted to build a new prison, completely up to modern standards, on a piece of land near the river and the railway line. Nobody lives there. But some farmers have been succesfully fighting this decision. I think they hope that when the plans are definitely burned, they can sell that ground as building lots (for lots of money).

I.m.o. public good should prevail over private interests. What do you think?
Posted by Nickie Fleming at 2:15 AM