As you must know by now, I'm a voracious reader (next to being an author) and one of my favorite characters in a book (or rather, series of books) is Aloysius Pendergast, the FBI agent created by Douglas Preston and Lincoln Child.

I stumbled by accident on the first book in which he appears (although he is not the main character): Relic. Since then I'm hooked. I've been buying all the novels in which he appears. Why? Because he appeals to me, and I'd say to a lot of other fans.

So who's this Pendergast guy? He was born around 1960 in New Orleans, Louisiana and hence he has this mellifluous Southern accent. He has a younger brother and this Diogenes is evil and is to play an important part in the books. He works for the New Orleans branch of the FBI, but frequently moves to other parts of the States when a case interests him, particularly when involving a serial killer. 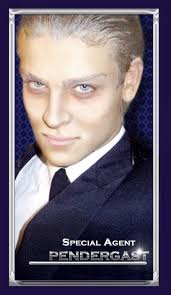 Pendergast is a slender man, with white-blond hair and is always dressed in black. Make no mistake, his clothes and shoes are tailor-made. He prefers the finer things of life and is highly intelligent. Also he is dangerous and not afraid to use violence. In short - a man after my taste!

Before the first story begins, Pendergast was married to Helen Esterhazy. But she died in a mysterious way. It is only in Fever Dream (the 10th novel in which Pendergast is featured) that we learn that Helen is probably not dead, and Aloysius sets out to find out the truth (in Cold Vengeance and Two Graves, which has only recently been published).

Pendergast is a rich guy. He doesn't need to work. He owns several houses (among which a plantation in New Orleans) and has a big apartment in the Dakota building, New York. He personal assistant is Proctor. He also has a ward, Charlottte Green - a woman who is over 130 years old!

In the course of the series he becomes friends with NYPD detectives Vince D'Agosta and Laura Hayward, and with reporter Bill Smithback (who works for the New York Times) who later on marries Dr. Nora Kelly, a curator of the New York Museum of Natural History). This museum features in the first novels, Relic and Reliquary. Mysterious things happen there, and mostly involve another doctor, Margo Green.

Most of the Pendergast novels can be read on their own, but I would advise to read them in sequence, as each book introduces characters who will appear in later ones. This is the list:
1) Relic (introducing Bill Smithback, Vince D'Agosta and Margo Green)
2) Reliquary (again with D'Agosta, Smithback and introcing Laura Hayward, who will later become D'Agosta's fiancée)
3) Thunderhead (not with Pendergast, but introducing Dr. Nora Kelly who falls in love with Bill Smithback in this one)
4) The Cabinet of Curiosities (Pendergast inherits a mansion in New York, where he finds Constance Green, and is helped to solved a crime by Nora Kelly and Bill Smithback)
5) Still Life with Crows (introducing Corrie Swanson, who is also to appear in the last novels)
6) The Wheel of Darkness (here Pendergast takes Constance to Tibet)
7) Cemetary Dance (again with D'Agosta)
8) Brimstone (featuring Diogenes)
9) Dance of Death
10) The Book of the Dead (again set in the Museum of Natural History)
11) Fever Dream
12) Cold Vengeance
13) Two Graves (where we learn Pendergast has two sons: a good one, and an evil one...)

Any other Pendergast fans around???

Posted by Nickie Fleming at 1:06 AM