A Walk on the Wild Side

Today's guest, Eileen Dreyer (writing as Kathleen Korbel) is doing a virtual book blast tour for A WALK ON THE WILD SIDE, a romantic suspense available March 19.

Eileen will be awarding a $25 Amazon/BN GC to a randomly drawn winner via rafflecopter during the tour. Please use the following link:
http://www.rafflecopter.com/rafl/display/28e4345f2633

J.P. O’Neill is in the fight of his life. A legendary agent with the DEA, he’s uncovered a conspiracy in his own agency. The only problem is he’s been arrested for the murder of his partner. If he goes to jail, he dies.

There’s only one solution—escape. The only way to do that is to kidnap his defense attorney. Lauren Taylor is a high-priced attorney doing a favor for a friend. Suddenly she finds herself on the run with the most dangerous man she’s ever met. Will she survive with her heart intact?

“Ms. Korbel generates an incredible chemistry between her two immensely appealing lovers that will set your heart on fire.” ~ RT Booklovers 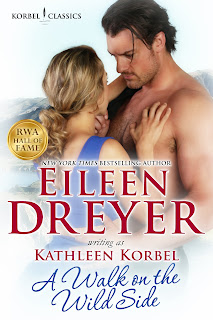 The first time she saw him, he was unkempt, unwashed and unshaven. And that was after they’d cleaned him up.

“It says here you were a DEA agent,” Lauren mused, her eyes down on the file she’d been handed rather than the bedraggled man who sat across the table from her.

“I’m still a DEA agent,” he allowed, his voice gravelly with weariness, his hands clenched around a foam coffee cup.

He’d already finished the coffee. Now he was tearing little strips off the rim with his fingers, fingers that were so grimy that Lauren had thought twice about shaking his hand.

She knew his story was that he’d been undercover as a street person, but she wasn’t sure he’d had to go to quite the lengths he had. James O’Neill smelled like a cannery and looked like the bottom of an oil drum. His layered clothes were torn and filthy, his beard gnarled and unruly, a salt and pepper variation on the nondescript hair that straggled down the back of his neck from beneath a knit cap. The typical uniform of any of the thousands of lost men who wandered the streets and slept in parks and under bridges.

But that wasn’t what kept Lauren from facing him. She’d sat across from her share of derelicts. After all, she’d been with the public defender’s office before joining the firm of Paxton, Bryant and Filmore. She knew how to survive a pungent odor or two and didn’t think twice about the type of grime in which a man chose to coat himself.

What Lauren couldn’t quite face were James O’Neill’s eyes.

They’d been the first thing she’d noticed, the single startling contrast to the rest of the picture that made her believe that O’Neill had been, at least until a month earlier, one of the DEA’s top agents. Brilliant, according to the records she’d scanned. Canny, daring, a risk taker of the first order who’d netted some of the top players in the game by running some of the most unbelievable stings in the history of the agency. A legend in his own time.

The file before her also said that sometime around dawn the man who sat before her had shot down his ex-partner in cold blood in a public park rather than be hauled in on drug charges.

New York Times bestselling, RWA Hall of Fame author Eileen Dreyer has published 31 romance novels in most genres, 8 medical-­forensic suspenses, and 10 short stories.
2015 sees Eileen enjoying critical acclaim for her foray into historical romance, the Drake’s Rakes series, which Eileen labels as Regency Romantic Adventure that follows a group of Regency aristocrats who are willing to sacrifice everything to keep their country safe. She is also working on her first non­fiction book, TRAVELS WITH DAVE, about a journey she's been taking with a friend's ashes.
A retired trauma nurse, Eileen lives in her native St. Louis with her husband, children, and large and noisy Irish family, of which she is the reluctant matriarch. She has animals but refuses to subject them to the limelight. 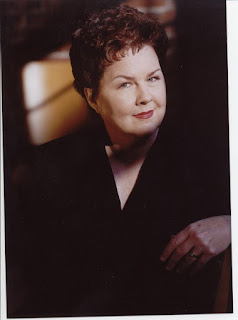