Red Devils without song to Russia

Most people know the Red Devils, the Belgian official soccer team (with players like De Bruyne, Mertens, Fellaini, Hazard, ...) They qualified themselves for the World Champignonship Soccer in Russia later this year.

Normally, an artist is making a special song for the fans to sing along during the champignonship. Especially popular was the song 'The Red Devils go to Spain". But this time, there was some controversy! The soccer union went for a rapper, a guy named Damso (unknown to me, but then I don't like that kind of foul-mouthed lyrics). Immediately, a wave of comment washed over the media. 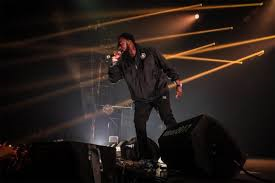 The rapper is not a feminist. When you listen (or read) to his texts, they are full of woman-unfriendly comments. The commenters demanded the soccer union would quit the co-operation with Damso.

They were helped by the sponsors. The most important one is Proximus. Now Proximus has a feminine CEO and she said in plain words they'd stop donating money if they went with Damso. Well done!

Not much later, after an equally condemning speech by one of our ministers, the soccer union stopped the co-operation with the rapper. So now the Red Devils will have to go to Russia without a song, but is that bad? Perhaps they can make one of their own?
Posted by Nickie Fleming at 2:22 AM